I had the best time at the Eugene Marathon this year!   Talk about a high energy, positive, and fun-loving group of people!

I was not able to run the marathon this year, while still recovering from injury.  I was able, however, to run the 5k with my husband Brian, daughter Brianne, and son Sawyer.

We live 1.5 hours away so we had an early start to the day.  We got there in plenty of time to get our packets, use the bathrooms, and even watch the start of the Kids Duck Dash. The Duck Dash was awesome, by the way!  It was packed!!

After the Duck Dash got going, we headed over to the 5k starting line. I couldn’t believe how many people there were! This was by far, the largest 5k I have ever been at.  I heard both of these Saturday runs had record registrations.  Not sure what the numbers were, but it was a lot!

Start of the 5k

The starting line was pretty exciting.  Lots of energy!  We were near the starting line, so we got to see the really fast runners getting ready.  Then the pancakes showed up! They were so cute with their pancake costumes and fit little runner legs sticking out of the bottom! Krusteaz Pancakes is one of the sponsors of the Eugene Marathon so they have this fun little promo that if you beat one of the pancakes, you get a year’s supply of pancake mix.

My family had decided on a strategy to stick together, since this was a fun run for us.  Sawyer did not say much as we were discussing the strategy. When we crossed the starting line, Sawyer said, “See ya!” and took off on his own.  Brian, Brianne, and I stuck together for the first mile or so, then we lost track of Brian.  Brianne and I walked some and ran some, but we stuck together the whole time.

The weather couldn’t have been better! It was perfect out.  We got to enjoy the beautiful paved bike path along the Willamette River.  I almost wish I lived in Eugene just so I could run this trail more often.  I grew up in Springfield and spent a lot of time riding my bike on the same trails with my mom and friends.

Headed back to Autzen, we caught up to Sawyer and Brian.  Sawyer hung with us for a little while until we entered Autzen.  Then his kick set in. He took off from us and videoed his finish.  He definitely enjoyed himself.  Brianne and I finished together and got a finish line pic together.  Brian came in shortly behind us.  He ran the whole way!  I was so proud of him. 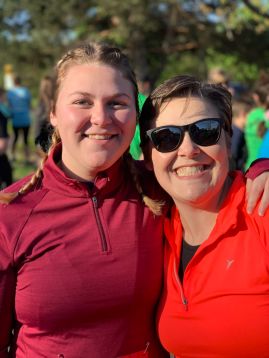 We got the same finish bag that they gave out for the marathoners, so it didn’t feel like we were less important or less supported.  After the finish we headed up and got some Krusteaz Pancakes, seltzers, and grilled cheese from Franz.

They had a dj playing some fun dance music so Sawyer jumped right in to show off his moves.  Then the pancakes showed up and danced with him.  Then Brian joined in the pancake dance party.

We spent the next few hours at the Eugene Saturday market and found Voodoo Donuts for the first time. 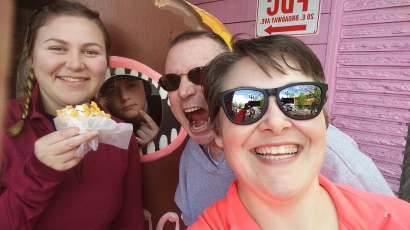 Then we headed to the Expo and met so many Facebook friends that I have never met in person.  The running community is so small and close!  I drove down the next day and watched my friends run the half and full marathon.  It was so inspiring!   I came home Sunday and registered for the Cottage Grove Half Marathon to run with Brianne.  Thanks for the discount from the expo! Brian, Brianne, Sawyer, and I also registered for a 5k in June.

I have two big highlights from the weekend.  First, was running with my family.  Getting to do something I love with loved ones is extra special. Second, meeting and hugging my fellow EMbassadors and Badass Lady Gang friends.  Third, (I know I said only 2, but I can’t leave this out) seeing my friends finish the half and full marathon. It tears me up to see them all put it all on the road. It takes months and months to train for these races.  So much hard work for that moment!  I love it.

Thanks Eugene!  I had fun being an EMbassador.  I hope to be in marathon shape and run the 2020 Eugene Marathon.